As a child LEGO was one of my favourite toys alongside my animal figures and cars. I had a box full of assorted LEGO bricks and a separate box for LEGO heads + accessories. I think LEGO has encouraged me to acquire important life skills such as how to be imaginative, mentally practical, logical & organized.

I spent hours designing cars or spaceships, but with a peculiar rule that each side had to be symmetrical. The plastic that the LEGO bricks are made out of is so durable that I’ve never broken any piece even though I’ve bitten a few and amazingly every piece has always fitted together perfectly.

I have always looked for a LEGO model with thousands of pieces even as a 12 year old, which meant the sets usually, had a 16+ difficulty. Ever since I bought the Rebel Blockade Runner (look at the list below) set I’ve always stuck to buying Star Wars models, I think it’s due to them being the most difficult builds. Since then I’ve been obsessed with Star Wars, reading the Expanded Universe books, comics and watching all the TV series. 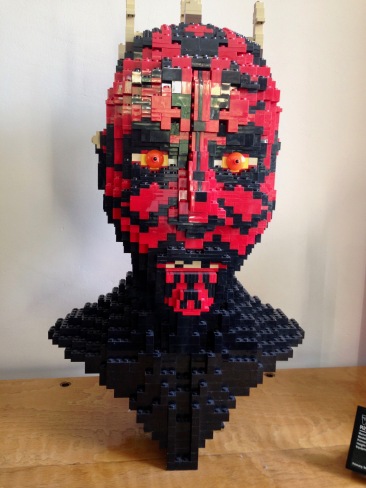 Due to DMD my building method has constantly evolved over the years, from needing no support to needing full support so now I (the brains) direct my helpers (the brawn).

There were a few depressing years for me when I couldn’t physically press the bricks together or reach over to grab pieces that for 3years I decided to stop building LEGO. I didn’t want to have to ask anybody for help or an intrusion of my personal space. I never realized how important my arms were until I faced physical barriers to my enjoyment. However, now that I’ve worked through my psychological issues I can now enjoy building LEGO with assistance, to discover the fun and the satisfaction at the end.

The latest LEGO set the Millennium Falcon has been a joy to build with my cousin Keshan, we found a couple of rare mistakes in the instructions, different coloured pieces & the funny monotonous instructions to build 12 similar wings and walls.

During the build I point to pieces or places to attach bricks with a chopstick, like a conductor. The mentality I have to create solutions to the problems I face due to my physical limitations has encouraged me to focus on the abilities I have. Quality of life is very important for me and I’m sure other disabled people feel the same.

Over time when I wanted a Gameboy Advance or PS2 I decided to sell some LEGO sets via the Leicester Mercury newspaper. I met a guy called Lee who bought a LEGO for his collection featured in his garage, since then I always sell straight to him. He kindly offered to create a number plate for the back of my wheelchair from his work place.

Thank you for reading about my history with the wonderful world of LEGO!