The technology industry leaders Microsoft recently announced the ground-breaking Xbox Adaptive Controller (XAC) designed directly for gamers with limited mobility. As the Muscular Dystrophy UK Trailblazer gaming consultant, I was lucky enough to put the controller through its paces to see if it could adapt to my severely limited motor functions.

I have previously written about the difficulties I have faced with gaming due to the relationship between my condition and lack of controller adaptability (click: Disability & the Gaming Industry). As I mentioned in Keith Stuart’s Eurogamer article (click here), “I ended up watching Youtube game walkthroughs of games I wish I could play. It was heart-breaking being reminded of my disability when gaming is meant to be inclusive.” My first experience of having to adapt my controller was through the charity ReMap UK and recently with Special Effect who adapted a controller with ports for 4 switches and lighter-press buttons.

The Muscular Dystrophy UK Trailblazers, a UK-wide network of young, disabled campaigners led by Lauren West recently published the ‘Changing the Game’ Report calling for the gaming industry to consider the importance of gamers with all abilities. This report perfectly fits with Microsoft’s ethos of inclusive design, an approach that involves identifying potential barriers and designing products for people with a wide range of abilities.

“Microsoft’s new Xbox Adaptive Controller is a welcome first step towards a more inclusive video gaming culture. It will make a real difference, particularly to people with a progressive muscle-wasting condition.”

Designing technology through the lens of inclusivity is absolutely imperative during the development of a product. Many people with disabilities are limited by the technology around them rather than their lack of ability. For example, imagine playing Super Mario World without a jump button, Gears Of War without a cover button or the Uncharted series without ludonarrative dissonance – it just wouldn’t work. Accessibility is about the creation of gameplay options to improve enjoyment for everybody, so without a jump button Super Mario World would become a limited inaccessible experience.

Microsoft understood this issue, so they decided to work directly with disabled gamers to create the Xbox Adaptive Controller. On the 9th of May, I was asked by Nic Bungay who has tirelessly worked with Microsoft alongside Lauren West (Manager of the Trailblazers network) to offer me the opportunity to test the Xbox Adaptive Controller. I had to confess to Microsoft that I didn’t own an Xbox One but a PS4, so I had never held their controller before. I was initially doubtful that I had the ability to hold the Xbox One controller let alone press buttons to play a game. My doubts became reality, as I found my hands could not operate the regular controller and I struggled to press the big A+B buttons on the XAC. I think that the Microsoft team were initially unaware of the full extent of how my muscle weakness affects gaming.

My tests on the 14th/15th May were extremely positive, the issues that I faced on the first test were taken on board and ideas were explored. Hector Minto (Microsoft Accessibility Evangelist) and the Microsoft team brought different switches for me to try and mounts to attach them to my wheelchair. The XAC provides agency to disabled gamers by giving you the flexibility to experiment and ultimately discover your optimal set-up.

I played Forza Horizon 3 and my set-up was: the left analog stick of the Xbox controller had a velcro strap to keep my finger on it whilst steering the car. The controller was connected using the brilliant co-pilot accessibility feature. Connected to the Xbox Adaptive Controller I had a chin switch to accelerate (RT) and right head switch for braking (LT) mounted on my wheelchair. I had two knee switches stuck to the bottom of the table to press the Rewind button (Y) or Challenge button (X). I navigated menus using the big A+B buttons on the XAC positioned under my right hand. It did take time for me to acclimatize to the new set-up. Due to my limited energy levels, it was slightly fatiguing for me to use the controller, as I usually do not use the muscles in my chin or knees. I can see myself mastering the setup in the future which gives me immense hope to tackle more games. Cyberpunk 2077, anyone?

During testing, I was interviewed during gameplay about the Xbox Adaptive Controller by BBC Radio 1 Newsbeat’s Gaming Reporter Steffan Powell (If you want to watch the full BBC interview then click here). I was really engrossed in Forza Horizon 3, at one time I was talking to Hector Minto and I remember saying “Let me overtake this guy”. That remark really demonstrates my enjoyment, empowerment and capability to play competitively.

“At Microsoft, we’re aspiring to have a living, learning culture with a growth mindset that allows us to learn from ourselves and our customers.” – Satya Nadella (CEO of Microsoft)

The wonder of the Xbox Adaptive Controller is that you have choice and freedom to fit the controls around your ability. Before I tested it, I was completely unable to play using the regular controller but with the perfect switch setup and co-pilot, I managed to win multiple races. It was an amazing experience to hold a controller which I never thought would be possible for me to use. The Xbox Adaptive Controller really does make the impossible possible, it will empower disabled gamers throughout the world. 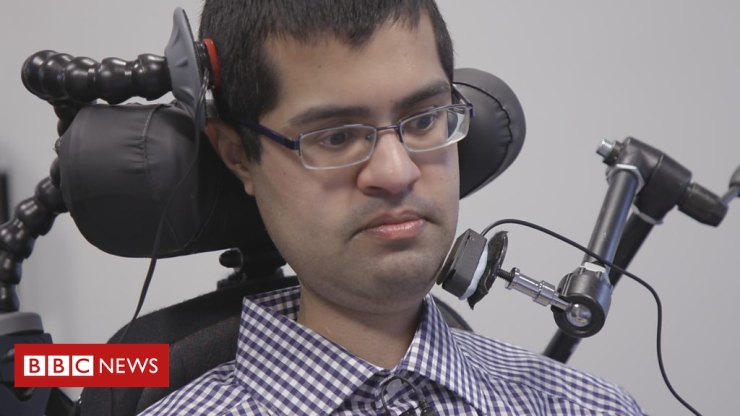 The Xbox Adaptive Controller is a watershed moment for the gaming industry, Microsoft has made the first big step to change the paradigm and make gaming inclusive. I hope that with the imminent release of the Xbox Adaptive Controller and the MDUK Trailblazers ‘Changing the Game’ report, it will give Nintendo and Sony the push to follow in Microsoft’s footsteps. Lauren West (Manager of the Trailblazers network), comments that “What we want to do now is challenge Microsoft and the wider industry to continue focusing on the needs of disabled gamers and create a much more positive and inclusive gaming environment for everyone.”

It’s exciting times to be working with technology companies, their eagerness to learn from people with disabilities will evolve the future. Inclusive technology is not just a dream but an achievable reality.

“We want to build intelligence that augments human abilities and experiences”